The Lab of Dr. Martuese 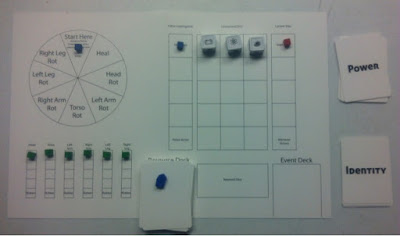 Above is the first playable prototype of The Lab of Dr. Martuese. This game is intended as a spin off of Dawn of the Zeds from Victory Point Games. It is a thematically linked game, not a mechanically linked game. The Lab of Dr. Martuese is not a State of Siege, and basically has zero mechanical connection to Dawn of the Zeds. In this game each player plays a chimp in the Lab who is trying to help or hinder the efforts of Dr. Martuese in creating a Super Zed. The first playtest was played with the following basic rules:
The game ends immediately if the Police Investigation marker is moved into the Police Arrive space with the player playing Horatious winning. (Horatious is the chimp that was added to the Dawn of the Zeds 3rd edition as a stretch goal of the kickstarter) It ends with a Martuese Victory if the Step marker ever moves into the Martuese Victory space AND at least 3 of the body parts are not rotten.
After the initial play, and after some discussion a few things are going to change. Or at least be tried: