The Chosin Few is almost done... 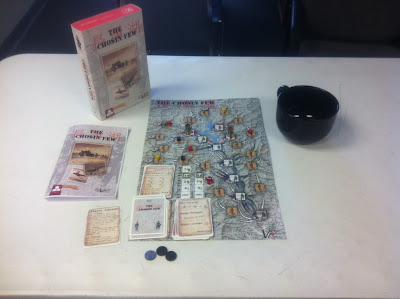 This game has been a real labor of love and it is so very near completion. It's in out of house proofing right now. So basically I'm waiting for spelling and grammar corrections. In theory it may be out some time during March :0)

As you may quickly realize if you peruse my catalog of released titles, I don't really do war games. Or historic games for that matter. This is a conscious decision. I'm not a historian and so I don't really feel like I should be the one to cover those topics.


But what the Marines (and everyone else for that matter) did during this battle is just amazing... And grossly underrepresented in the wargame community in my opinion.

In short, roughly 30k UN forces (1st Marine and 7th Infantry) were were overextended across a narrow stretch of road and surrounded by (conservatively) 150k Chinese forces. And somehow not only did they survive, but while pushing their way out they inflicted such heavy casualties to the 8 Chinese divisions involved that they had to disband 2 of them and were down in total about 40% of their normal combat effectiveness for months afterwards.

Staggering. To me it is the modern equivalent of the Spartans at Thermopylae, but without all the Marines dying in the process.