Surrounded, with a Shotgun (SwaSG) 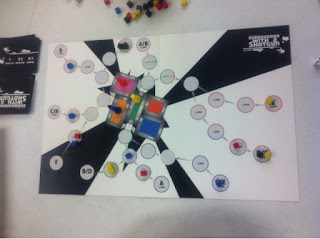 This game started its life as a joke. A few years back, during an office Christmas party at Victory Point Games, we had a gift exchange. And not just a gift exchange, but a white elephant gift exchange. For us, that meant humorous gifts primarily. My entry into the exchange was a completely untested, and as a result very broken game called Nate's of Siege. Nate's of Siege was basically a zombie game in which the player was trapped in the VPG office and being attacked from all sides, but instead of zombies the player was being attacked by hordes of Nates. It was a Natepocalypse.

The gift was a hit. Good laughs all around. We even played it and found out that one of the two possible victory conditions was basically impossible. The files were set aside and basically forgotten about for a while.
About a year, maybe a year and a half later, I looked at the files again. I read through the rules and really dug the core mechanisms. None of the numbers were balanced, and there was certainly a very simplistic game. But the core was interesting. So, I started thinking about it. A lot. Ultimately, the only things that were kept were the core combat system, and the games central structure. I.e. the sequence of play.
The central concept of the combat system is that using a shotgun, if there are more than one enemy in a space, you are more likely to hit one or more of them when shooting into that space. To a point. So, whenever you attack a space you roll a number of dice equal to the number of enemies in the space, with a cap of 5 dice. Results of 4+ have an effect. On a 4, an enemy gets pushed away to another space. On a 5, an enemy is removed from the board and returned to the enemy pool. On a 6, an enemy is removed from the board and placed back in the box, out of the game. That's it. That's the combat system. Until I started adding DRMs (Dice Roll Modifiers). But even then, it just changed so that after 6+ resulted in removing an enemy from the game.
The sequence of play is also very simple. Draw a card; spawn some enemies; move some enemies; the player gets to take some actions; repeat until you can't draw any cards or there are no more enemies (on the board AND in the pool). That's it. Dead simple.
Ok, so what changed? Basically, the way the board works, and the actions available to the player. Oh, and it isn't just a solitaire game anymore.
First the board. In Nate's of Siege, there were a number of tracks that each lead to the office. The tracks were not connected in any way beyond that. In SwaSG the tracks function a bit different because they merge. The merging results in some interesting movement as it can cause some enemies to move multiple times. Additionally, in Nate's of Siege the whole office was treated as one space, and players position was abstracted out. The board in SwaSG has a central building with various rooms. Each room only has line of sight to certain spaces outside the building so you have to move around a bit to properly defend yourself. This line of sight mechanic means I can have some spaces that can be seen from multiple rooms, and have a DRM in one room but not the other. Or to have some spaces that are just not visible from any room.
So, the player actions? Ok, so in the original Nate's of Siege, the player only had one option. Attack. Their choice was in where they attack. SwaSG adds a few more actions for the player. Most obviously, movement. For one action, the player may move from their current room to any other room in the building. They can also spend an extra action before the roll to get a +1 DRM or spend an action to place a Barricade. The Barricades are a temporary barrier that can only be used once. There is one per player so in a multiplayer game you get more of them.
Speaking of Multiplayer, the game plays 1 to 4 players. And each player count has a different game board, which keeps the game balanced regardless of the number of players. And by balanced, I mean more or less consistently brutal. This is not an easy game to win. It's not as difficult as The Chosin Few, for which I ratcheted up the difficulty quite a bit to illustrate how amazing the actual historic outcome was, but it is certainly more difficult than Pew, Pew! which is probably about average on the solitaire game difficulty curve. I'd say, as a rough estimate there is probably an 80% loss rate for most players.
The game is finished from a design and development standpoint and is going into the art pipeline at VPG. Chelsea Autio, who did the art for Healthy Heart Hospital is going to working on this one so it should be gorgeous when it's all said and done. We've talked about a cross between the costuming style of The Warriors and the rendering style of Black Dynamite. I'm looking forward to seeing the result :0) And posting some of them here and on BGG.