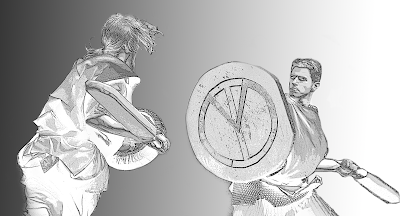 So... I think I've come up with a good idea for a roll and move game (something I never thought I'd say). Roll and move as a fighting game. Here's how it works:
The board has two sections; an outer section with spaces for the players to move an action pawn around, and an inner section where they carry out actions.

Each player on their turn rolls three dice, chooses two of them and a direction to move their action pawn (this gives them 6 choices if no doubles or triples are rolled). Whatever space their action pawn lands on determines the action their character takes in the inner section.
The inner section represents an arena or some sort of fighting area.
The actions may include some combination of movement, attacking, or defending. And some of them (primarily defending actions) may also allow you to roll again and take another turn.
If you attack your opponent you flip one of their health markers over to its potential damage side.
If you defend and one of your health markers is on its potential damage side flip it back to its undamaged side.
If one of your health markers is on its potential damage side and you don't defend, remove the health marker from the game.
If you ever have to remove your last health marker from the game you lose.
If you haven't lost your opponent takes their turn.
That's pretty much it. In terms of action density, I think I need to make sure there are more attack actions than defend actions. Say maybe a 2:1 ratio. And of the defend actions only about 1:4 should allow an extra move.