So, I've started working on a follow-up project for The Chosin Few. Currently, I'm calling it Reich but that is likely to change. It uses the basic A.I. system of The Chosin Few modified somewhat to allow it to scale to the entirety of WW2. You play as the military head of Germany who has to carry out the orders of Hitler. This will, of course, necessitate a few tweaks to the engine. I would love to get some feedback/thoughts on the following tweaks. 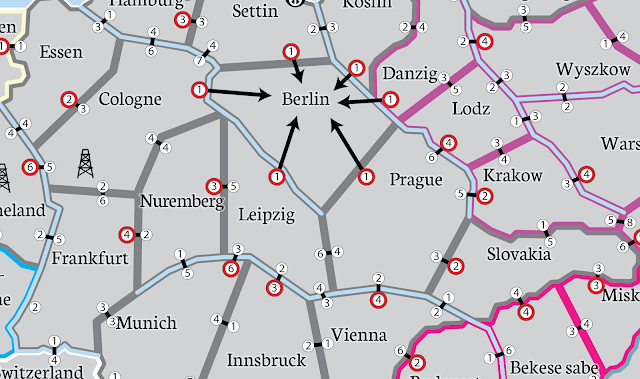 Enemy Movement in The Chosin Few followed colored arrows. This combined with an ordered sequence of the Order deck allowed me to very accurately control the flow of enemy movement in a way that simulated the historic outcomes by making sure they tended to surround and cut off. At the larger scale, the arrow system doesn't exactly work. Or rather to make it work would require so many arrows that it would be damn near impossible to figure out what should actually happen, or if the number of arrows was kept in check would result in an easily exploitable system.
My current idea for the new system is a priority check system with a default. Instead of arrows, each space has a number of circles near their borders. Each circle has a priority number in it. One of the circles has a thick red border around it. How it works, each time the Allies move units, they look to see if there are any of your units/assets in the adjacent spaces. If there are, they move into the space with the highest associated priority number. If there are no adjacent units/assets they move into the space indicated by the circle with the red border. If the spaces with the red border are followed each time they will ultimately lead back to Berlin. If Berlin is taken over you lose.

An important aspect of WW2 was the availability of Oil (amongst other resources). I want this to somehow influence the game. I'm currently playing with the idea of having actions be limited by the amount of oil you have access to in some way. I'm thinking something along the lines of a draw-cup. For each action, you must draw a number of chits from the cup and apply any effects to the rest of the turn. If there aren't enough chits in the cup for a given action, you can't perform the action. At the start of the game, you would have two oil chits. As the game continued you could gain more by conquering certain territories or as a result of certain orders success or failure.
I also want to totally decouple the number of actions you may take from the cards that indicate what enemies are moving/mobilizing. This is so that I can have the Allied Forces scale up without your own doing so as well.

Similar to The Chosin Few there will be an Orders deck. Dissimilar to The Chosin Few, these will not be specific but rather generalized. Rather than saying take and hold position X, it might instead say increase the number of oil fields by 2, or acquire a new port. Each such order would have a time limit and a penalty for not achieving it. Considering the oil example above, you might get two penalty chits in the action draw-cup to simulate decreased effectiveness due to not reaching the Riech's oil acquisition goals.