So, a few weeks ago I came across a video explanation of Quantum Tic Tac Toe. Basically its a version of tic tac toe designed to teach the concept of entanglement.
The basic idea in terms of game mechanics is that when you make a move, you actually make two and only one of them will turn out to be the actual move. Essentially they are not moves but instead potential moves. Each space that shares a potential move is entangled. At some point on a future turn there will be enough potential moves that they will form a logical loop. At that point you can choose to observe one of the moves in the loop. I think it has to be one of the moves just played. Depending on which possibility you choose to observe the rest of the moves in the loop will populate. For example: 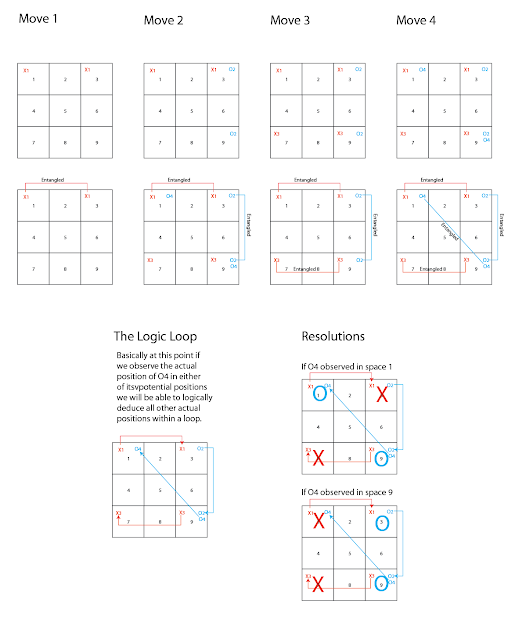 This is amazingly interesting to me. But... Tic Tac Toe is not interesting to me.
So of course my brain started wandering a bit on how I could potentially use this mechanism in a game that is interesting. Slowly over the course of about a week I began to formulate what I would consider a fairly solid idea of how this mechanism could be effectively used. Worker placement with a setting that is by definition shrouded in unknowns. Espionage!
Now, it's far to early conceptually for me to really nail down the exact setting so this could literally end up set anywhere from a WW2, to a distant future world, to high fantasy with magic, to modern corporate world to well anything really... That parts not really important at this point. What is important is how the players will interact with the game. And of course all of this may change but my current thoughts are that there will be two main shared play areas. The Worker Placement area, and some kind of Victory Tracking area (a map of the world where influence is placed in an area control manor or a depiction of the stock market or whatever). The players will only directly affect the Worker Placement area but may affect the Victory Tracking area based on how the workers resolve when "observed." And the game should of course ultimately be won on the Victory Tracking area.
For the purpose of discussion I'll be assuming for the time being that we go with an Area Control victory condition, say tracking influence over regions of the world in a Cold War setting. Players will have two basic options on their turn, Place spies, or Confirm a report (aka, observing a result).
Placing spies is simple. You just take a set of your spies and place them on the board. They must be placed in two separate positions. And they can NOT link two spaces that are already directly linked. (In the tic tac toe example, if X places X1 in spaces 1 and 3, O can't place O2 in spaces 1 and 3 as well. I don't know if this is true in quantum tic tac toe but I think it will be important here) Nothing else happens at this time.
Confirming a report is a little more complicated. You must choose one of the sets of spies placed since your last turn and decide which one is true and which is not. Resolve the effect of the space observed, and return BOTH of the spies to their owner. Then ANY other spies in the same space as the observed space have to resolve the other spaces they placed in, since their spy was NOT actually in the space the player choose to confirm and therefore MUST be in the other space. ALL spies that resolve are returned to their owner. This can cause chain reactions, and if there is any question about the order of resolution the player who decided to Confirm decides the order. ALL spies that resolve are returned to their owner.
Resolutions could be anything from gaining a resource (money, intel, an asset in the field, whatever) to affecting another player's resources (killing off an asset), to affecting the Victory Area in some way (placing influence for example). Some spaces may require the use of resources for some effects, or may have a hierarchy of possible effects. Say if you have a military asset you place 2 influence in china, else if you have a diplomacy asset gain an intel marker, if neither gain money.
Anyway... thats where my brain has been of late... I'll be continuing to work on this for a while I'm sure :0)