Greater Than Games just posted the winners to their Blank: the Blank game contest. The winners should be congratulated of course, but unfortunately, I did not win. However, I now feel no qualms about discussing my entries publically. I had submitted four games to the competition in as many weeks.

In short the premise for the contest was that the theme for the game and the core mechanic for the game had to be one and the same. So without further ado. 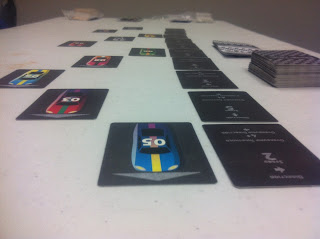 Thematically, it's basically Nascar. So the cars draft with each other for added speed, and the players draft cards to make selections about what cars will do. This was the first one I did for the contest. I think it's pretty damn good so I'm probably going to rename this and release it at some point. Probably something along the lines of Draftcar Racing, but I'm not married to any title as of yet.

The way the game works... Basically a bunch of cars (up to 10) are laid out in a line. Each player is represented by one of those cars. They are each dealt a hand of cards and begin placing down cards to manipulate the way the cars will move/interact with each other and then giving their hand to the player whose car is currently behind them in terms of race position. This continues until all the cars have a card played on them. NOTE: Only the player who owns a car can place cards on it. Once all the cars have cards played on them the cards are revealed and the cars change position in various ways. Cycle repeat until the players no longer have enough cards in hand to play one on all the cars in the game. This is the end of a lap. There are three laps. At the end of the third lap, the player whose car is in the lead position of all player's cars wins. i.e. You don't have to be first, but first player. 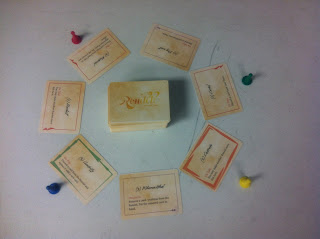 I'll be the first to admit this one is a little crazy. But it works so well... Rondel as a mechanic is one of those names that I never liked because it did not immediately tell me what it was or did in an intuitive way. Outside of games its not a term that exists in my life. So I looked it up. Turns out it is a few things; a type of ditch, a type of dagger, a piece of armor, and what I went with... a type of poem.

What all of these things have in common is shape. The ditch is circular the grip of the dagger is round if viewed from the position of the dagger pointing at you, the armor piece is the round bit at the armpit in full plate, and the poem is cyclic. There are specific repeating verses in a rondel poem. This felt right for the theme of a rondel game as there are specific repeating actions in a rondel game. As you go around the rondel you get exposed to the same sets of actions as possibility over and over.

So, how to integrate the poem type into the game type... by making a game that helps you write poems. 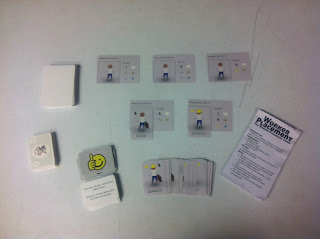 Next, I decided to tackle worker placement. The obvious theme was of course a temp agency. So that's what I went with. And this probably ended up being the most complex of the games I submitted.

Instead of having workers individually assigned to players I decided to make the workers be unowned. The player who places them gets the effect immediately but there is no lasting effect based on worker ownership. Each worker has one or two skill which modify their potential effects when placed on jobs.

Speaking of jobs... Each job has a number of possible rewards ranging from money (which is how victory is measured) to extra placements, to drawing special cards called customer satisfaction cards, or even gaining new workers to place. Lots of player choices. 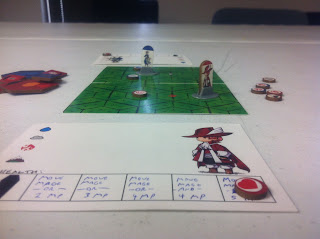 My last submission... and probably least complete. And the only one I didn't do all the art for. So... I apologize for the stolen wizard art. I would certainly have art done before doing anything commercial with the game.

The premise is a wizards duel. Red Mage vs Blue Mage. The most interesting mechanic is probably the variable size hexes. Basically there are three overlaid hex grids. The players move around on one of them. The elements they manipulate move around on another one and the spells move on either the same grid as the player or for the larger area of effect spells, on the larger grid.

In  terms of gameplay, the players run around manipulating various elements to form shapes/patterns which cause spells to spawn and try to hit each other with the spells. Do so enough times and your opponent is defeated.