Continuing the new monthly update format. This time, because a lot of them don't have updates I'm going to have two parts. The first part is for games that have NOT been updated. This will just be a list of links back to the last blog update that includes that game. The second part is for games that actually have an update this month.

The Conquests of Sol: The war for Europa 2165

Submitted to a publisher. They asked me to test one rules change. I made the change and put a PnP up on a Seeking Play Testers thread on BGG. I haven't heard anything back yet.

This is a "Real Time Strategy" game in a box. It is not actually real time, but it very much has the feeling of a real-time strategy game. Basically, units keep moving until you tell them to stop or they can't anymore for some reason.
This is a war game but its a wargame without dice. The random element is player choice. And because the game is based on simultaneous reveal instead of an I go You go mechanism there is always a question about what the best move is.
I'm planning on officially submitting this game to Victory Point Games this Saturday.

Stage: Entered into a Contest

There is a WIP thread on BGG that is being used for the 54-card contest. Its pushed back to page 5 of that forum at the time of this writing so I doubt there will be any actual feedback from posting on that forum. But who knows.
Not much of an update really... but I wanted to hopefully drive a click or two towards the WIP thread.

Two player combat between teams of drunk (if not drunken) masters. The bars just closed and the masters of two schools meet in the street.
This is essentially an abstract game in which the way a game piece moves is entirely dependent on the space they currently occupy. Whats more, the way one piece moves in a given space may not match the way another piece moves in that space.
The game is basically done from a mechanics standpoint. I need to either find the time to do the art or more likely the money to commission the art. Then, I'm probably going to self-publish this one. Its a particularly good candidate for self-publication because it has a low component count (36 cards and 14 counters), and therefore a low cost.

I got a lot of feedback from proofreaders that resulted in me noticing some fairly significant issues in the rules. So, the clarifications continue. This is taking the bulk of my time these days.

This is my Solitaire epic. Its a States of Siege™ game being published by Victory Point Games. 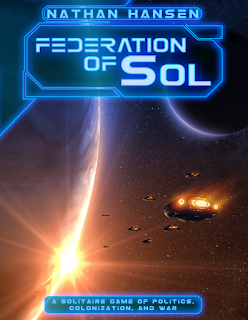 Humanity has just gotten to the point technologically where it can settle words outside of our own Solar system. Turns out, we aren't alone... And all the locals systems are already claimed by neighboring empires. So... you're going to upset a few Aliens.
Like all States of Siege games, you have to defend a central location (Sol) connected by converging tracks, but it differs in several fairly important ways. The most obvious of which is that instead of being a game about survival, its a game about expansion. You still lose the game if the central location is lost, but you can only win by colonizing 6 location outside Sol. Additionally, the game is driven by dice rather than cards.
This game has a fairly detailed political system including; how your people feel about your rule, how the local empires feel about you, and how they feel about each other.
I'm in the process of integrating proof feedback into the game. Once that is done, it will effectively be out of my hands and awaiting its slot in the Victory Point Games release schedule.

I've designed a cube tower that I can have built on The Game Crafter... I need to make sure the cut lines are all laid out optimally, but after I am confident of that I'll be ordering one so I can start gross testing of some of the ideas. Everything else I should be able to either pull off my prototyping shelf or print up myself. Hopefully next month will have a significant update on this one.

This one is inspired by games like Game Dev Tycoon on the PC. But, since its going to be a board game I figure the games being made should be board games. At this point its little more than a concept. I have a simple theoretical sequence of play and notes about how certain mechanisms might work but nothing I've tested yet.

The publisher I was talking to about this passed on it.

What happens when I challenge myself to make a roll and move game? You get a 2 player fighting game in which player action selection is based on players rolling 3 dice, picking 2 and a direction. The game board consists of two major areas; an inner board on which the players actually fight and an outer board where players move a pawn to select their next combat maneuver. 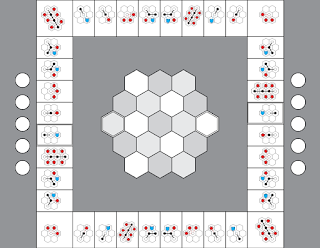 Standalone (although it has almost limitless expansion potential)

I submitted this to a publisher. Not holding my breath, since they are a large company and just started taking submissions, so I'm sure they were overloaded.

So, this is basically my take on the Cards Against Humanity style party game. That said, it is nothing like Cards Against Humanity.
Basically, one player is the Doctor and all the other players are Patients. And the Doctor is trying to diagnose the patients. If they succeed, they get points. If they fail, the patients get negative points. So... everyone wants the Doctor to get their diagnosis right.
Gameplay wise, the Patients draw a card that tells them what their condition is and then they make a short statement (in character). They can't directly say whats wrong with them or use any keywords indicated on the card. Then the Doctor asks them up to two questions, which they must answer in character. After that, the Doctor makes a diagnosis. If they are right they take the card and place it face down in front to them. If they get it wrong it is revealed and placed face up in front of the Patient.
I'm pretty comfortable with the rules and gameplay at this point, but need to make new cards. I want about 500 cards in the final product.