So, it has been a while since I've written a blog entry. Which is mostly unacceptable. Yes, life happens sometimes, but that is kind of a shallow excuse. In any case, I'm going to try to correct that going forward by doing updates in a more scheduled fashion. For now, let's say every Monday at noon pacific. Because that's my day off. We'll see how I do with that.

To start this new schedule off I'm going to give a general overview of a selection of the games I am currently working on. This is as seen from space kind of overview, so details will be a little scarce but should give an idea of the games I'm working on at the moment. In the coming weeks, I will try to do a more thorough write-up for each of these games.

Surrounded, with a Shotgun 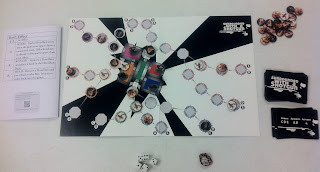 This is a 1 to 4 player converging track game (or what Victory Point Games calls a "States of Siege"). Essentially players are trapped in a building being beset upon from all directions by ruthless gangs. It's inspired in part by the Jonh Carpenter movie, Assualt on Precinct 13.
The major update for this game, the artist is going to be starting on it soon. She sat down with me on Wednesday to play the game and go over the games art requirement. We discussed the games needs at length and started spitballing gang and hero themes. In terms of visual style, we've loosely agreed to a kind of combination of The Warriors in terms of costuming and the cartoon Black Dynamite in terms of contrast and color scheme. 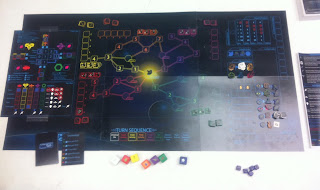 This is a solitaire, space themed, quasi 4x game. Technically it is also a State Siege game as well, but it isn't card driven so its victory conditions are a bit different from most games in the line. Most States of Siege are strictly about survival, but this one is about expansion.
It should be going to out of house testing soonish... The developer is working on the final touches for the rules, and the artist is working on his second pass at the board.

This is a game that I may try to self-publish. It's basically an area influence game. The areas, in this case, being the cargo holds of various trading vessels coming and going from a future space trading station. Plays 3-5 players in about 30-45 minutes.
I'm talking to a subscription service about potentially having it be released through them first. A mutually beneficial arrangement. Great PR for them since they can then say they helped an Indie project be funded. Great for me because it means funding, and hopefully those subscribers would expose others to the game and result in other future sales. 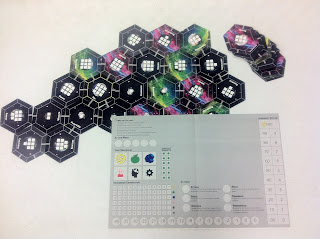 I don't even have a proper name for this game yet... I'm currently referring to it as Stellaris Project because the original inspiration was the computer game Stellaris. 3-6 players, probably 3 to 4-hour games... Very early so it's hard to say definitively.
At this point, it still pulls a lot from other games with similar themes. Particularly the economy of Eclipse. The major features that separate it out at the moment are the modes of travel. Each faction may have one of three types of FTL, leading to three very different play styles. And there are at the moment 6 possible victory conditions.
I'll likely be posting about this game a lot in the coming year as I develop it further.

Day at the Dawg Track 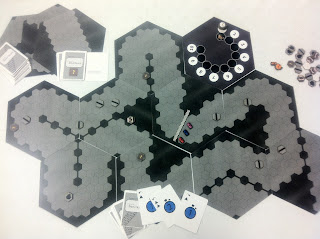 This is a programmed movement racing game for 2 to 5 players. Think Mario Kart as a board game. In terms of theme, I'm currently thinking it will be in the same universe as my Dawgs of War game, but set after that war. This is mainly contingent on me getting the same artist to work on this game. This is mainly limited by my ability to reimburse him.
I got this on the table a couple of times in the last few weeks. It plays very much as I want it to play, so I should be able to move into out of house testing fairly soon. 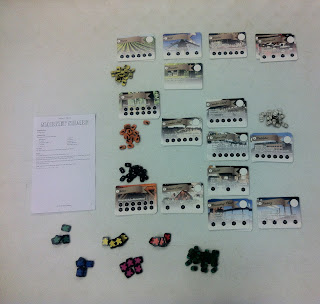 This is a 3-5 player game is about building a good supply chain and making lots of money. Lots of converting of resources. Kind of a worker placement tableau game. Each turn player may either place or move a worker. Then after all players have done so actions are carried out in a very specific order. Basically, late portions of the chain of actions activate first, freeing up space for other actions.
I'm kind of stuck on this one. I love the mechanisms, but I don't really know how I want the game ending. I know I want the winner to be the player with the most money, and roughly how long I want a game to last (45 minutes or so) but everything I've tried in terms of end game trigger feels flat. 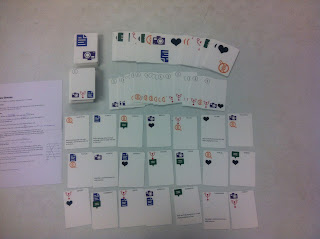 Every kind of card drafting mechanism I could think of thrown into one game. Just because. Player count is still loose. Certainly 2+ players, though. The game starts with an open draft of characters. Then players can add cards to their hand in a drafting mechanism similar to Ticket to Ride which is made somewhat more interesting by a third drafting mechanism similar to 7 Wonders. Scoring is done via a set collection mechanism.
There is a lot of interesting stuff going on here, but something is missing. It feels too dry to me. Probably because it's about lawyers. A retheme may be in order. 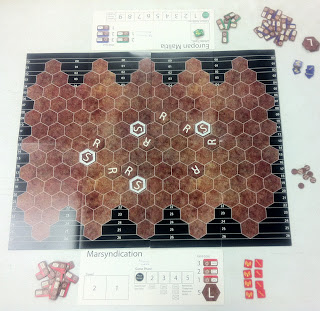 A two player sci-fi wargame. This is the first implementation of a "Real Time Strategy" engine I've been working on. It is not actually real time, but simultaneous action selection based. It hits that real time feel because your actions carry over to future turns if you don't do something about it. Basically, you give two orders per turn and may cancel up to two orders per turn. And units will continue to carry out orders until they can't or the order is canceled.
The game is done from a mechanical standpoint. I'm concerned the theme and mechanics won't appeal to the same audience and wonder if I shouldn't retheme it to a historical battle. I'm hesitant to do so because of the research involved in making historic games. I'm probably concerned about nothing and should just finish it as a science fiction game.

Roll & Rondel / The Guild board game

Inspired greatly by The Guild series of computer games. The core mechanism as you may have guessed from the working title involves rondels. Each player on their turn rolls a number of dice, then places them on one of four rondels. Multiple dice may be placed on the same rondel, but if you do that means you aren't activating one or more rondels.  Each rondel has a "theme". That is one is related to manufacturing goods, one to transporting those goods, one to personal development, and one to "shady" practices. There are four unique markets for the goods, each of which has its own local values. Not really a playable game yet, but I think I can have it playable given a month or so. When exactly I'll find that month of time is up in the air. 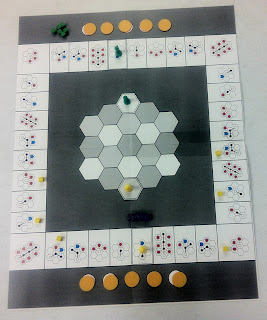 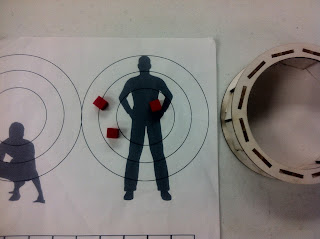 A true first person shooter experience :0) This game's core conflict resolution system involves putting cubes in a cup, then flipping the cup over onto a silhouette of the player you are targeting. For each corner of a cube that is inside a silhouette, the target takes 1 point of damage. Combine that turn based but simultaneous movement, and various size cups (based on weapon and range) and you have a unique experience.
The major hurdle I'm still working out is the AI system for NPC's. Once I have that worked out I'll be able to focus on designing scenarios to include. 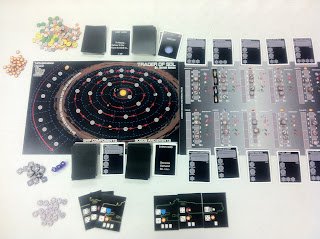 In this game for 1 to 4 players, you travel around the Solar system trading goods, fighting pirates, and carrying out various missions to try to amass wealth and prestige. The economy on each planet and moon is dynamic and responds to player action as well as events. Additionally, the planets are constantly on the move thus the distances for trade routes are in flux.
I think this game has fallen victim to a common flaw. Feature creep. It is currently on hold so I can give myself a bit of cognitive distance. I assume when I pick it up again I'm going to start by coming at it with a chainsaw, cutting large feature sets entirely. Most likely everything involving pirates and combat. While all interesting, it didn't add much to the game. 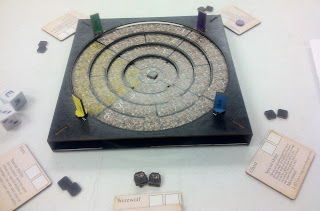 Technically playable with 2 players, best with 3 or 4. Features a series of concentric rotating boards, various monstrous characters, and asymmetrical play. One of the players must play the Adventurer, whose goal is to go into the Labyrinth, collect 3 treasures, and escape. Each treasure grants the Adventurer a new power making their victory increasingly more likely. All the other players play as one of the various monsters that plague the Labyrinth. Each with its own unique power. The monsters all have one goal, to capture the Adventure and take them back to their personal lair. They are not working together, however.
This game has been done for a long time. Mechanically speaking. Artwise it hasn't even started. I had basically put this game aside about 7 years ago because I couldn't figure out how I would produce it. I'd submitted it to a few companies at the time and that was the primary reason given for rejection on multiple occasions. I think I've figured out how I could go about it so I'm starting to consider either pursuing self-publication or resubmitting it to a few companies now armed with a solution. If I go the self-publication route, I'll need some art...

Last Flight of the Valkyrie 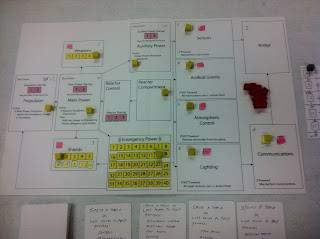 A solo game in which players control a crew of the USS Valkyrie, a warship on a desperate attack run on an enemy base. Inspired equal parts from my Navy days and the scene in Battlestar Galactica when they jump the Galactica into the atmosphere and it freefalls during the fight for a while... Awesome.