After Action Report of first gross playtest of Abstraction. 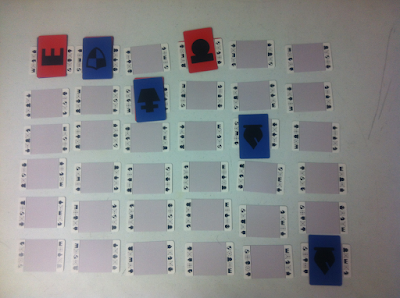 I'm past the purely conceptual stages and on to an actual playable prototype :0)

The above image is the end of the first ever playthrough of Abstraction. The blue player won because none of the red pieces can move.

As stated in the title, this was a gross test. Meaning that I was playing both sides and basically just moving pieces around to make sure it all felt like it was working the way it should. I am quite happy with the results.

The whole game took maybe 10-15 minutes to setup and play to completion. Obviously this time would go up with more concentrated move consideration, but all in all a very fast game.

The setup in this test was random. A random grid of 6x6, then a random placement of 6 of the 7 pieces along the players edge. This resulted in some pieces having very limited initial movement options. Going forward, I will likely keep the random grid, but make the piece placement a player choice.

The red player went first, and was able to immediately attack from the lower left corner to the upper right corner of the board. The blue player didn't have an immediate defense but was able to position himself over the course of two turns to start driving the attack back towards the red player and by the halfway point or so was able to force the red player to choose between his loses without gaining headway. This was mostly do to the limited mobility of the initial placement. The red "pawn" in the center of the example above was never able to use any of the special movement on the cards and only move forward one space each turn.

So in short, the mechanisms work but setup needs to include some choices. Next step is to get it in front of a pair of testers and see how they respond.