As those of you who follow me on Twitter are aware, I've started a weekly game design challenge with the intention of designing 52 games in one year. I've also committed to trying to be active on Twitter during the development of each to generally work on my social media skills.

For those who don't follow me on Twitter, by the way, this is a thing I'm doing. This post is about the fourth game in that hopefully very successful series of games.

This weeks game was based on a random draw of three cards from the Deck of Many Games. 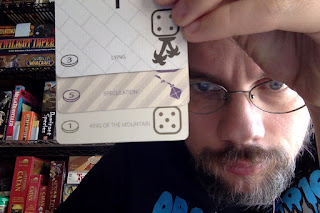 As you can see, the keyword prompts used for this design challenge were; Lying, Speculation, and King of the Mountain.

Now, on to the game.

Death of the Mountain King

Death of the Mountain King is a 2-6 player game about determining the successor to the crown.
It's really a fairly simple game. Players will take turns playing cards face down on one of three potential heirs, and place an influence cube each time they play a card. Not all cards are good for the heirs. After everyone runs out of influence cubes the cards are revealed and whoever has the highest score becomes the new King. And whoever has the most influence cubes on the new King wins the game.

HERE ARE THE PRINT AND PLAY FILES