#52GameDesignChallenge - Week 2 - The Devils Own Day

As those of you who follow me on Twitter are aware, I've started a weekly game design challenge with the intention of designing 52 games in one year. I've also committed to trying to be active on Twitter during the development of each to generally work on my social media skills.

For those who don't follow me on Twitter, by the way, this is a thing I'm doing. This post is about the second game in that hopefully very successful series of games.

I plan to have each game in the challenge have some sort of randomized element that I have to include in some way. For the second challenge that random element was a random Wikipedia article. Well, technically four random articles that I then put on a poll on Twitter. An article on the 9th Arkansas Field Battery won the poll. Since as far as I could tell, that particular unit was only verifiably involved in one battle, that's what this game is about. The Battle of Shiloh, also known as "The Devils Own Day" in at least one of my sources. And I think that's a cool name.

Now, on to the game.

The Devil's Own Day 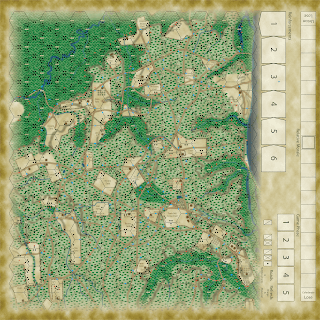 In short, The Devil's Own Day is a two player war game about the Battle of Shiloh. One player takes the role of Grant, and the other Johnston (and later Beauregard).

In terms of gameplay, it is a hex and counter wargame but instead of using CRTs and an 'I go, you go' turn structure as I think is common, it instead uses a diceless combat resolution system that is based on individual unit strengths and positioning, and has a round structure with various movement phases based on unit type.

Due to the time constraint and the ambitious size of this particular entry, I wasn't able to actually get it to a playable state in time to test it. I literally wrapped up the first draft of the rules this morning. So, I'm only cautiously optimistic about the results at the moment.

HERE ARE THE PRINT AND PLAY FILES