In a previous blog entry, I discussed ideas for a Space themed 4x "euro" design. Mostly in that blog I covered really broad strokes kind of stuff. Games that inspired me, the basics of the movement mechanisms, resources, ideas about leadership and building stuff. And that great, but today I want to really dig into the idea a bit more. A lot of stuff is still nebulous but some of the elements have solidified nicely and I want to talk about both. 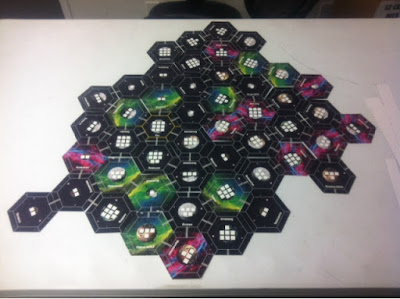 The whole movement mechanism is solid. The idea being you spend an action and get to move a number of ships once. How they move that one movement may be radically different from player to player, but one action means ships will move once. To reiterate the last blog a bit there are three types of movement; Warpdrive, Hyperdrive, and Wormhole Generators. Warpdrive is slow but you can ultimately go anywhere. Hyperdrive is twice the speed of Warpdrive, but you have to follow set paths. And Wormhole Generators, are twice the speed of Warpdrive but you have to build up an infrastructure and it can be targeted.

I'm pulling a lot of inspiration from Eclypse here. I know other games have done the cube placing to reveal a number mechanism before, but I'm not as familiar with those as I am Eclypse so it is my main inspiration for the economy. Where I'm changing the Eclypse mechanism is what is really important to this discussion, though.
The biggest difference is that players don't control systems in the same sense that they do in Eclypse and as such the discs don't get stuck on the board and increase the cost to run your empire. I'll be adding a few other ways for that to effectively happen but they won't go on the system tiles themselves.
The second major difference is how the resources work. In Eclypse, you have 3 resources and you gain them at the end of the round. The exact sequence of this makes it so you can gain money first then you must pay upkeep, then you gain the other resources. This is so if you don't have enough money to pay your upkeep you can pull from the other resources at a conversion rate. But this game has 6 "resources"; Energy, Food, Materials, Physics, Society, and Engineering. And with the exception of Energy and Food, they do not accumulate over time. They must be used the turn they are generated or be lost. The reason Energy can accumulate is that it is tied to one of the victory conditions. And the reason Food can accumulate is it is tied to organic population growth. Both of which I will discuss later.

One of the actions you can take is to train a leader. Leaders are very important. They do four things. They give you a Fleet bonus if they are with a ship. They give you an Economic bonus if they are on a world. They give a global bonus as long as they are alive. And the cost to perform an action is determined in part by the distance of the action target from the nearest leader.
You gain leaders by spending resources training them, and the number of leaders you may have is limited by two things. The number of worlds you have majority control of, and you economy. In short, you may only have as many leaders as worlds you have majority control of, and each leader will require a disc be placed and remain on them, effectively giving them an upkeep cost. This, combined with Edicts (which I cover later), effectively replaces the system control idea from Eclypse.

I have come up with an idea for combat that I think will play well with the rest of the game. I posted the idea on Reddit though and got fairly mixed results in terms of feedback so I'm not sure its what I would call a selling point. The specific numbers may change but in short it works like this. Each player involved in the battle puts cubes into a central cup equal to their effective combat strength in the battle. Then 10 neutral cubes are added. Mix it all together and draw 10 cubes. Player take hits for each of their opponents cubes drawn. They assign the hits based on a priority list, either core to the game or on a drawn card. This is supposed to represent that the players are not the generals but more like political figures.

Also, if you attack someone you have to trade discs with them. These go in a section marked "Active Wars" on each player's Mat. Effectively what this does is show the ongoing cost of a wartime economy. At least that's the intention. And in order to get the disc back, both players must agree. I would hope this would lead to situations where if someone gets overly aggressive, all the players can keep them in check by all declaring war on them. This would of course hurt everyone's economy a little but it would really hurt the agressive player.

Systemically, I don't want a static tree. I want something dynamic. An idea I had is to make each tech have a color, and up to two future tech colors. Basically, what this would do is lock in what color tech the player is allowed to research next. It's kind of a tech tree/path building system.

An Edict is a law or governing decision that you may make to affect the game in some way that has a net gain, but potential negatives. As an example, you may institute an edict that gives you a bonus to food, energy, and material production but hurts science production. It could be phrased like this, "Place up to 4 (total) cubes from Energy, Food, and Material on this Edict, then place 1 neutral cube on Physics, Society, and Engineering." In order to initiate this Edict, you would have to place on of your discs on it as well, thus locking up some of your upkeep.

Well, I still haven't quite gotten this playable. So that is still the big target on the horizon. I'm hoping I can at least get to a point that I can seriously move some pieces around this Sunday, but realistically its probably going to be a few weeks. I need to at a minimum design the "early tech" and a few Edicts and Leaders before this can be tested in any reasonable manner. Each of those will take a significant chunk of design time.
Oh, and here is a look at the working player mat. Totally subject to massive change :0) 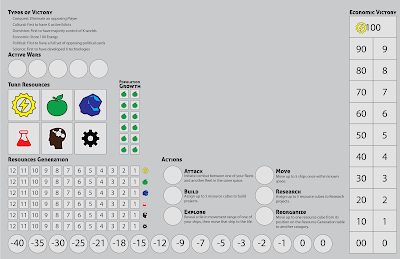